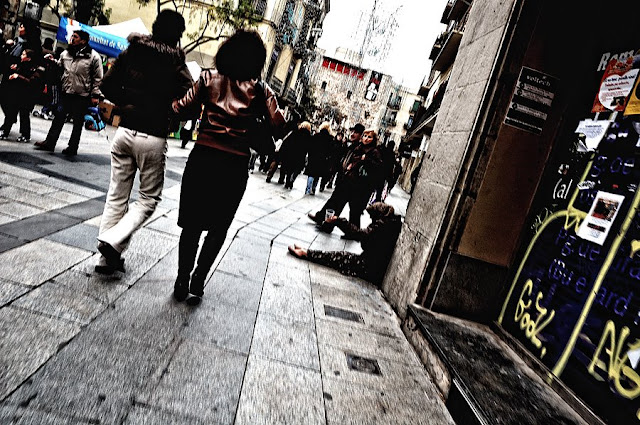 Recap of lecture at the Helwan University, El Cairo, april 28, 2008

CITIES WITHOUT A CITY
Manuel Delgado

The monumentalised city exists in rivalry to the socialised city, a city shaken by frequently microscopic movements, the whole consisting of densities and thicknesses, not always legitimate or permitted happenings and uses, dislocations that are generalised… In contrast to all this, the city or bit of city is thus converted via monumentalisation for both commercial and political ends into a mere thematic spectacle to be uncritically digested by a tourist obedient to the dictates of the map or guidebook. The city finally becomes unified, then, endowed with meaning through a textualising manipulation that cannot help but be controlling and authoritarian. Whence the architectonic complexes, the emblematic buildings, the pedestrianised streets in which there are the only tourist shop. Spaces bounded by visible barriers in which – as occurs in certain beachfront hotel facilities – the tourist fins himself alone with others tourists, in settings in which the local inhabitant is beating a hasty retreat or has already been expelled. Inasmuch as it is utopianising, the monumentalisation of cities is directly linked to the penintentialside of all city planning, to its potentially or factually authoritarian dimension. The fanaticisation of the outcome of this desire for a felicitous city turns out, then, to be inevitable inasmuch as the conceptions that it projects – that it sells, we might say – cannot tolerate the presence of the slightest imperfection that might give the lie to the anxious totality.

The so-called historic city is in fact the city that has managed to eliminate the past, since as a utopia it is also a uchronia, a time outside of time. All that one might say of any supposedly absolute and eternal reitication could be applied to the monumentalised city. In the final analysis there is a forgetting of the human being and his internal tensions and incoherence.

The realisation of the hyper-virtuous society that the tourist welcomes implies, therefore, and necessarily so, a negating of all uncertainty, of risk, of the inexplicability of fate, of the accidental, and of all that may be akin to or derive from ideas of human freedom and sincerity. A purely conceived space and one unfolding as pure. A victory over the concrete and the multifarious; a victory of the predictable and the programmed over the casual and confused. The policies devoted to mass tourism serve, the, to reinforce the urbanistic and architectural fight against the tendency of any urban social configuration towards muddle and opacity in the name of beauty and utility. The anxiety of the institutions and the businessmen interested in selling a city is the same as that experienced by the good city planner, since bothersome to them all is the same evidence not only of inequalities, of social unrest, of the more undesirable kinds of marginality that emerge here and there round the peaceful aspect of monument, but of the actual impenetrability of urban life, obliging them to make sure that tourist never stray from the dully marked circuits, from the ritual paths, given that at their edges the genune city lies perpetually in wait. Outside of the landmarks that shine with their own light on the street map the tourist folds and unfolds, a little further on, not very far from the colonnaded squares, the cathedrals, the picturesque neighbourhoods, a murky mist issues forth at ground level: the city tout court, without epithets, plasmatic and strange, chronically unfriendly. This is what the tourist mustn’t see: what there is, what is opposed to or ignorant of the metaphysical dream the guidebooks promise and cannot offer: that transparent, docile city which, placid, indifferent to life, sterilely shows off about what it is not, or ever was, or ever will be.

Thus culminates an increasingly radical split between the represented city and the lived city, between an irrevocable city and a constantly selfquestioning city. What is promoted as a “rehabilitating” of certain urban settings consist in saving the prominent points of the particular city from, that is, the threat that the misery of the trial uses which were registered in their immediate vicinity supposes for them. The conservation of monumental centres is converted, then, into the creation of genuine theatrical spaces. The monumental city can only exist, therefore, in opposition to the city – be keeping at bay the dynamics of a city or, better yet, the city as dynamism, and, further on or before, all forms of irreversibility; that is, the variable of time. In practice the historicist or artistic thematisation of urban centres involves a qualifying of the urban environment that distances it from the real practitioner – the resident or habitual user – since it culminates in uninhabited historic neighbourhoods riddled with restaurants, hotels and luxury shops and in the hands of a property speculation that demands excessive sums of money to lie in them.

A spectacular décor for historic recreation and for cultural liturgies of all kinds, and also for the official institutions installed therein to be immersed in a settings consisting wholly of venerability, learning and beauty. Historic and monumental centres imply the official version of what was already a process of zoning and ranking of the urban space in bipolar terms: one space meant for the habitual, the empirical, the instrumental; and a second devoted to tasks of pure, affect-oriented representation, spaces dor and of the feelings, territories of the memorable, in this case in accordance with institutional and business parameters of what must be cost-effective and the same time stirring and evocative, a generator of economic as well as symbolic capital. The urbanist and architect place, themselves at the service of the ultimately museifying –read embalming – objective of urban centres, qualified as monumental. They’ve been doing this for over a century, contemporising the often purely parodic materials of urban memory. Firstly by means of historicist imitation, after the fashion of the aforementioned Barri Gòtic, in the case of Barcelona. And secondly by means of postmodernist ironising and pastiche, of which Barcelona’s Pueblo Español would be both a precedent and a presage. The agreement between urban planners, cultural managers and promoters and tour operators may be total, especially if all three are in a position to grasp the ultimate meaning of their work. This is nothing other than offering the tourist and the investor, but also the actual resident, the most homogeneous kind of image possible of the space he consumes, user or inhabits. In all three instances the aim is to generate centralisation, a centralisation in which urbanisation is united or blended whit monumentalisation, a great dream of the total integration of interests, collective spirit and uncritical participation in the named.

The efforts are everywhere to be seen that this or that person – from the urbanist to the tour promoter, talking in the politician and the businessman who encourage and sponsor both – makes in order to impose spatial and temporal discourses which present that which is there an d doesn’t stop –the urban, that which is agitated without respite, that pure working through – is what any institutionalised order attempts in its relations with social space. What is involved is making the tourist believe what anticipates having reason to believe, which is nothing other than the hallucination of a completely organic city, impossible were it not on the basis of inventing and publicising this principle of identity, which may prove to be no more than concealing the perpetually changing dimension of the universe it never manages to completely hide. In contrast to a memory consisting of clichés and fixed points around monuments and monumentalisation, what there is in fact is something else: countless memories, infinite practices infinitely reproduced by an activity that is at once molecular and massive, microscopic and magmatic.

A world of places without names, an ectoponymy, which is the precise opposite of a toponymy. Concealed from the tourist who arrives from elsewhere and from the citizen converted into a tourist in his own city is how the streets and squares are secret and silent archives, incomplete tales of lived experience, a reminder of heroic deeds without issue, incomparable settings for minimalist epics of those who have naught save own bodies.

Potent memories without power that confront those of an impotent power, its commemorative, triumphant, false, spectacular cities. It is in order to tame and to watch over this artefact of existing plurally that is any city that the order of institutions and the logic of business attempts to instaure its ornamentation. This means attaining a major objective: that of constituting the sceneographic, cognitive and emotional bases of a politically pertinent and commercially sellable identity, a unitary urban spirit that imposes itself once and for all on an endless multiplicity of occurrences, ramifications, lines, protuberances, bifurcations. Perpetual motion, a ballet of unpredictable figures, heterogeneity, chance, murmurings, interferences – the city. Barcelona. It is by negating this kaleidoscope endowed with intelligence that the politician, the city planner and the tour promoter attempt to impose the simplicity of their schemas, the peacefulness of their cities without a city.

Publicat per Manuel Delgado a 22:30